We are nearing the end of our fifth week together. I am in love and I dreading the time that my awesome pups will be going to their new homes. But when they go, they will be prepared for anything that awaits them in the big big world outside our house and garden.

We did Biosensor exercises from their third to sixteenth day. The program is concerned with early neurological stimulation in order to give the dog a superior advantage. It utilises five exercises which are designed to stimulate the neurological system in a way which doesn’t occur naturally during this early period of life. They impact the neurological system by kicking it into action earlier than would be normally expected, the result being an increased capacity that later will help to make the difference in its performance.

When the Adventurers ears opened, they first started to listening to classical music and later to different music and sound effects. Still in the whelping box, I added different materials and stuffed animals for them to crawl on. Now they live in a larger puppy pen, enriched with toys, balance cushions and different hanging objects. All with the purpose of habituating them to many different stimuli. In their outdoor play pen, they have many obstacles to climb on, materials to walk on and toys to “kill” 😀

They are an inquisitive, courageous, agile group of puppies. They love to explore anything new, are open to new people and don’t get nervous of loud, sudden sounds. Soon we will also see how they are with new animals, when we make an outing to a friends farm.

Preparing my Adventurers for the outside world is the part of breeding I have been looking forward to most. It is an exciting and interesting journey we are taking together. Watching them grow and develop different characters is a beautiful thing to see. I am also busy assessing them to see, which pup will be suitable for what activity and which one will stay with me ❤ 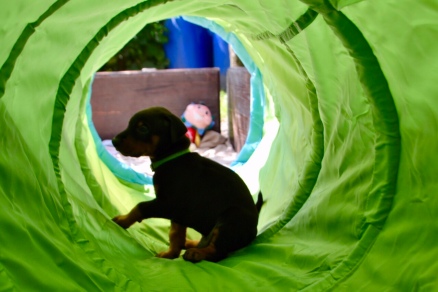 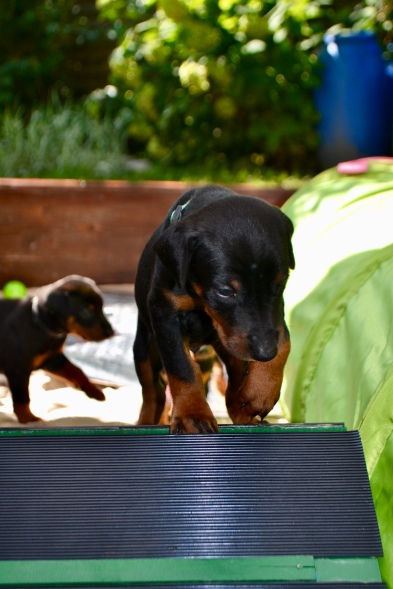